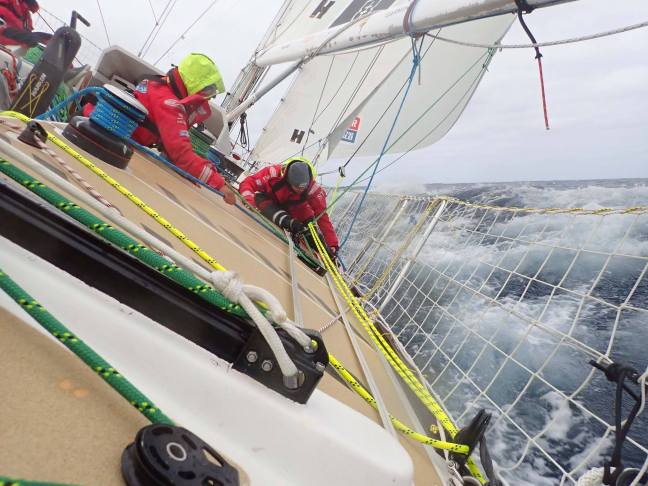 They say ladies glow whilst gentlemen perspire but I can assure you that neither gender fully understood just how wrong this saying is as we left the wonderful town of Airlie Beach in Queensland, Australia to sail some 4,200 miles up to the Chinese playground of Sanya. I have proof both sexes sweat buckets! But more of this later

On February 29th we slipped lines to begin our journey through the Whitsunday Islands and, to minimise the risk from the myriad of navigational obstacles they hold for sailors, we motored for the first 20 hours. It was wonderful for once to be able to sit back and take in the magnificent views this collection of islands provides. It is so sad to see the utter devastation last year’s cyclone caused in many areas and it is only now that some communities are managing to regain some semblance of normality, my heart goes out to them. That night must have been horrendous as well as tragic.

As we carefully wended our way through the famous “Hydrographer’s Passage” marking one of the few relatively safe passages for boats to use to move from the the group of islands that border the mainland into the open ocean we marvelled at those early sailors that discovered this way in. The reefs around there are plentiful and treacherous and many an intrepid seafarer must have come to grief as they explored totally uncharted waters so far from home. I was on the helm and found it quite unnerving despite all the modern navigational equipment we were carefully monitoring below

The fleet rendezvoused a few nautical miles further on and the real race started under “Le Mans” rules. The weather in Airlie Beach had been wonderful as it had been throughout our stay in Australia but we were still not really prepared for what was to come. For most of the trip the temperatures on deck were in the upper 30s, sometimes in the 40s, with absolutely no shade, so you can imagine what it was like down below! There is minimal airflow below deck as most of the time we need to have all the hatches closed to stop water flowing through our living quarters and this, obviously, compounds the problem! On deck the humidity is relatively low but below it is rather different and, to complete the adage in my opening paragraph, we become horses, the sweat literally pours off you 24 hours a day. Great for weight loss but horrendous when trying to sleep as you might imagine. We all have to be very conscious of our own personal hygiene not only to ensure we are not causing offence to our fellow crew members but for health reasons.

Personally I suffered with heat rash on my upper body, good old ‘yachty botty’ and had a allergic reaction to the inner mattress cover we were provided with by Clipper. The latter was painful and widespread and we only identified the cause after some 10 days. I removed it and gradually the symptoms diminished. What must the sailors of yesteryear done without Sudocrem! Thank goodness for my wonderful, very twee, bed cover made by our family friend Lynda – little does she know how useful that has been! (Lynda, it’s not that twee really, one colleague has a wonderful Smurf bedcover!

There is no point putting on clean clothes as they will become just like the set you have just taken off within minutes- apart from which you quickly run out of clean clothes anyway! You rapidly learn to live in what you have got on, but for me with one major exception, and that is to try to not sleep in wet underwear as that can end up with nasty consequences! What I did was to hang 2 shirts and 2 pants from the webbing of the bunk above mine so I always had something relatively dry though not clean to change into as I got into bed. It didn’t always work but in the main it helped a lot. In these conditions the boat resembles a Chinese laundry much to the skipper’s disgust

With our usual sense of timing/planning we managed to find much more than our fair share of windholes and for one 36 hour period we sat there simply bobbing around. Not only is this soul destroying but it is frustrating when you see other boats steaming ahead on their merry way to Sanya. Unfortunately the weather forecasts we were provided with turned out to be rather different to the reality on the early stages of this race. When we expected a cyclone we had wonderful clear skies, and when we expected windholes we found wind! This does make route planning somewhat difficult as you might imagine

This was exactly the case as we approached the famous “Doldrums”. For the day or so before we reached the corridor there was no wind but when we entered it we had great sailing winds – and in the right direction! Under racing rules we are allowed to motor through the Doldrums and this we did – a decision that, in the end, complicated the rest of our journey

Remember, we had motored out of the Whitsundays at the start of the race and then across the Doldrums. This used a lot of diesel! So much so that with more than half the trip to come we were in danger of not being able to run our generator as often as we needed to generate power, to run the water maker or other very important things like charging phones and iPads! Use of fresh water was severely limited so there were no showers nor washing of clothes. The Chinese laundry became a very smelly Chinese laundry as all we could do was try to dry not washed clothes but our dirty, malodorous, stand up on their own, kit. Interesting

Gradually we inched our way up to Sanya, sometimes recording 100 miles a day and sometimes 270 and as we entered the final approach with around 4 hours to go we were sitting in 8th position, rather creditable we felt given all the windholes we had found! Then disaster struck. Firstly we found ourselves surrounded by fishermen’s drift nets. They can be hundreds of yards long and unattended. Luckily they are fitted with AIS’s and we can see them on our plotter, but nevertheless they are a real pain when racing and several times we had to take avoiding action. On top of this a sudden squall came out of nowhere and ripped our spinnaker apart! And then we found ourselves in 10th position

Welcome to Sanya and what a welcome we had!

P.S The umbrella in the picture unfortunately blew away as it wasn’t tied down properly!