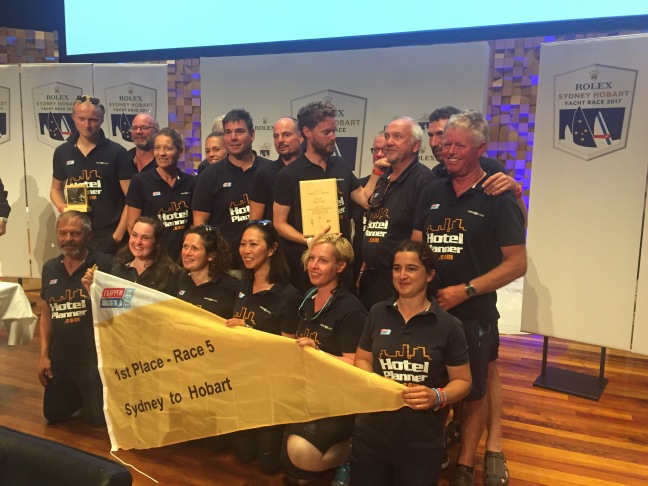 TAnd so, after 1 hour 42 minutes, we resumed racing.

What an experience, thorough professionalism, complete calmness with the right result – one safely rescued fellow sailor returned to his own boat! But would this ruin our chances of doing well in the race? Fortunately, the race rules clearly allow for exceptions to be made for MOB recovery in the form of a time redress – but more of this later.

When I look back on it I can only conclude that the fast, efficient and successful way our team worked has to be completely down to the training Clipper make us all undertake – the relentless MOB drills we do every day (in training and before every race) are there for a reason – and we now understand why. The sea is a dangerous companion when racing and totally disproves the maxim “it will never happen to me”.

I hope I do not come across as boastful in this part of my adventure but I felt it right to document not only what happened but why it worked. Training and great teamwork really do pay off not only at sea but in all walks of life.

Our newly invigorated team swiftly settled back into the relentless routine of racing. Although, by now last in the Clipper pack, we made small gains here and there. On the third night we caught up with the Invictus UK boat navigated by Sir Robin Knox-Johnston. We sailed by not wanting to smile too broadly only to find he caught us up again overnight!

Those first few days we had the wind behind us and were able to fly the spinnaker all the time and made excellent progress. On the second day we heard that the first boats, the maxis, had already crossed the line smashing the record by almost five hours!

We continued to make up miles on the rest of our fleet and then after one very stormy night with numerous sail changes we found ourselves in a wind hole, gently bobbing along, right in the middle of the pack – we had caught them.

At this point our skipper decided that we had everything to gain and nothing to lose so he went for it. Dragging every infinitesimal bit of speed out of almost no breeze he had us rapidly changing sails – windseeker up, windseeker down, code 1 up, code 1 down, yankee1 up……. and so it went on and to the crew’s delight we caught up the 3 hours we were behind and eventually crossed the finish line in 10th position, just 1 hour behind the first boat to finish. The entire Clipper 70 fleet finished within an hour of each other and Sir Robin’s 68 was only a few minutes behind! That just shows how well these boats are matched.

But this is not the end of the story as we had to submit our redress claim – would it be considered and would it get us a podium place? There is an international panel of five judges that sit on the protest/redress panel and they would be sitting the next morning – another night to wait!

By this time word began to spread about our MOB adventure and congratulations and plaudits were coming in from all quarters – not just the Clipper family we were pleased to see. Unfortunately, some people on social media took an opposite stance and wrote some really stupid stuff but my favourite repost was “Better be thought a fool than open your mouth and confirm that you are one”. There are, sadly, some real idiots out there.

I must confess that not much sleep was had that night and the Customs House (a pub really) did a roaring trade and must have made most of its annual profits that night!

We did it! The redress panel awarded us 120 minutes redress which meant we beat the rest of our race division by one hour. We were first! Congratulations all round – well done crew and especially well done Conall , our skipper – you made that victory happen.

It was my birthday and I do not think I have had a better birthday present.

Conall had his beard trimmed! The reason became obvious as we attended the formal Rolex Sydney/Hobart Race prize giving that afternoon.

1) We won the Meritorious Performance Award, the Rani Trophy, for our MOB rescue. 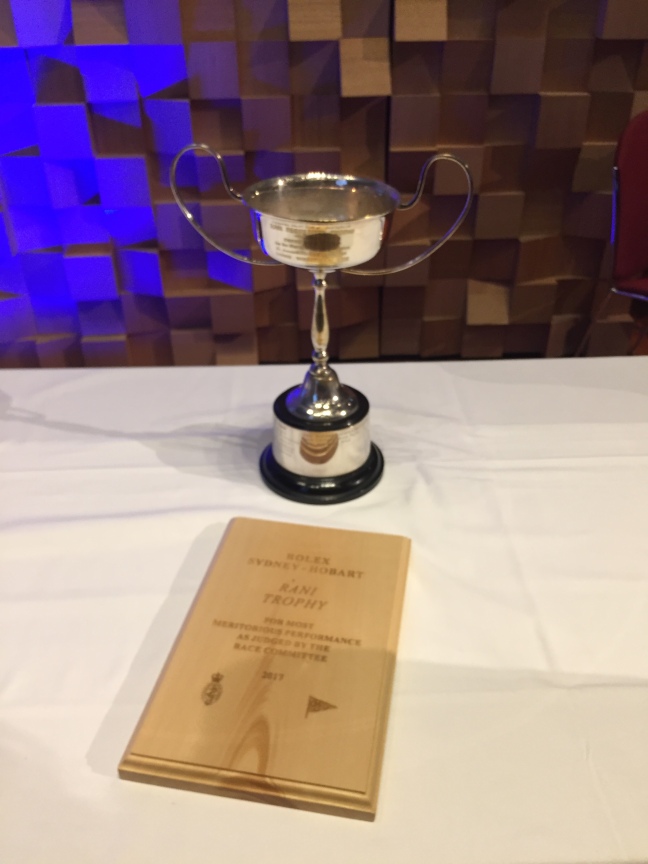 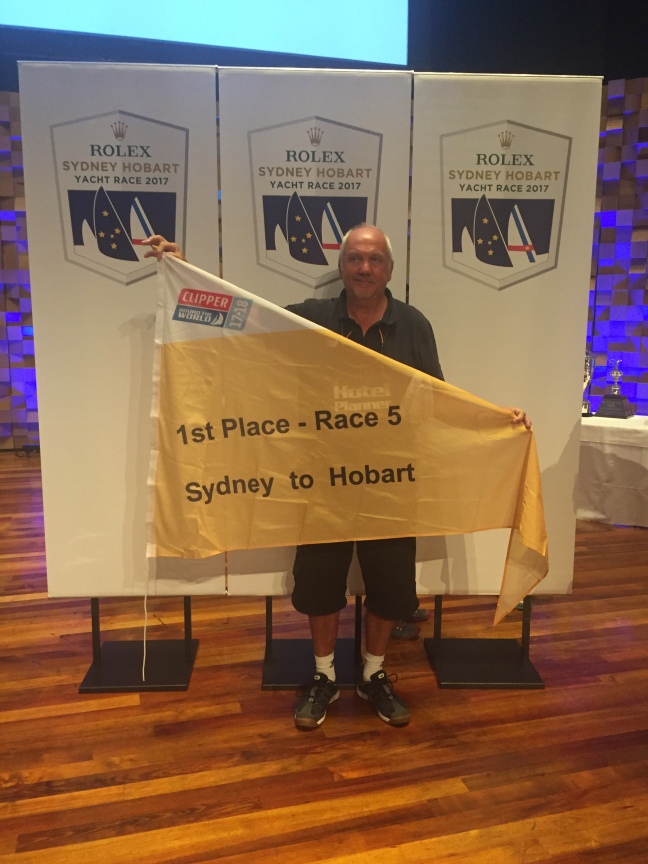 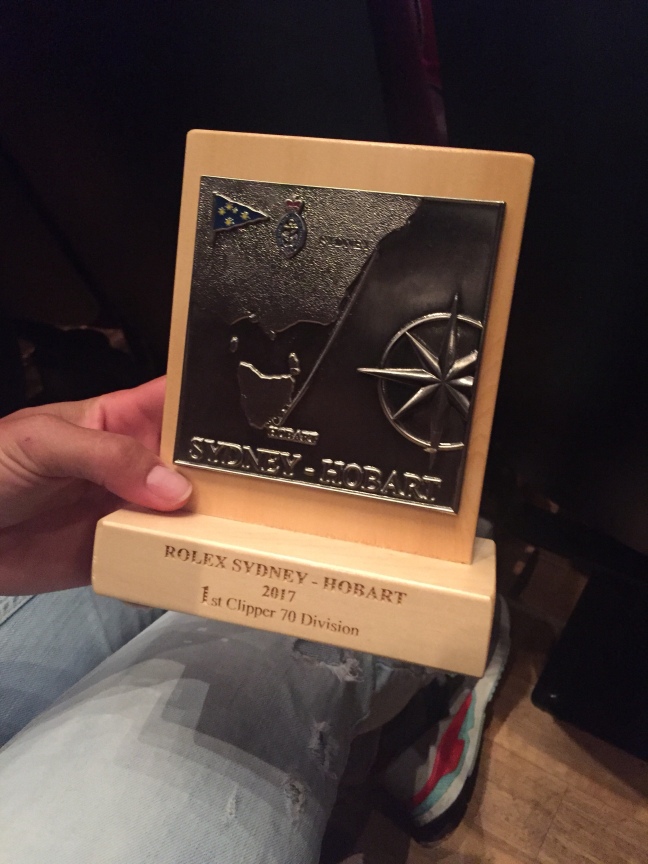 3) And the Commodore of the Cruising Yacht Club of Australia made a massively congratulatory speech about our MOB role and how it set a huge example to the yachting world. (I have put a video of this up on my Facebook page).

Two plaques, one Division Winner flag and our first Pennant. Not a bad haul and a great way to end an adventure of a lifetime – the greatest yacht race in the world – the Rolex Sydney to Hobart Race!

And now on to Airlie Beach and more stories to tell I am sure!